Even though a goat can only carry about 50 pounds, compared to a horse, which can carry up to 200 pounds, goats are herd animals that are easily socialized to people.  A well-trained goat doesn't have to be led, and when grouped, goats naturally establish a lead goat to follow, which they will do, remarkably in the same order each time.  They'll naturally stay grouped together and follow their "human" and they won’t bolt due to the scent of a predator.  Compare that to a llama that sometimes needs to be dragged, or a horse that could easily get spooked and run away.  They're perfect for high country trails as their sure-footedness allows them to navigate rougher, steeper terrain than most other domestic animals.

Goats cost less to care for than larger animals, they require less space, and can fit handily in the back of a pickup, so no special trailer is required.  When on the trail they consume a wider variety of plant material than larger animals and consume far less water.  They'll follow their "human" with no need of a tether, and they'll usually stay near camp during the overnight hours.  It all sounds pretty good.  Right?  Well, there is a catch.  A well-conditioned goat can only go about 12 miles a day.  And, conditioning is key to making that 12 miles a reality.  An out-of-shape goat won't even give you a mile before it's done. 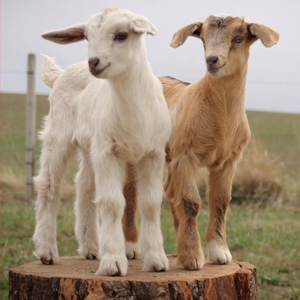 Training goats as pack animals is a fairly easy process for a patient person.  For one thing - it's nearly impossible to convert an adult goat into a pack goat.  You need to start with babies, and you need to plan to bond with them like you would pet dogs.  They're smart and they learn quickly, but the first thing you need to learn is how they like to be loved.  Whether it's a scratching under the chin or long strokes along the back, each goat will let you know what they like best, and that is how you will show it love from then on.  Goats absolutely cannot take heavy-handed training.  Striking your goat will ultimately result in a goat that will forever be problematic.  A loud voice and a squirt bottle will have to be your reprimand.  Just a single syllable yell such as “GET” or “HUP” will provide surprisingly satisfying results!  Physical aggression toward your goats will erode their trust in you and could cause them to be aggressive toward other humans, so never hit or kick your goats.

As you train your goats you need to teach them to stay behind you.  They must learn that you are the alpha and they must stay behind you at all times.  The best way to keep a goat from passing you is to use a walking stick.  If a goat attempts to pass, simply tap it lightly on the fleshy part of the nose and say “BACK”.  It only takes a couple times before they “get it” and listen.

Any gender of goat can be a pack goat, but most people prefer wethers (castrated males).  Does work just fine but can’t carry quite the weight of a male, and bucks are only good for part of the year.  When they’re in rut they can be unruly as well as smelly.  With the right goat and equipment, you and your goats can all look forward to many enjoyable adventures together!

For more information on pack goats visit the website of the North American Packgoat Association at www.napga.org. 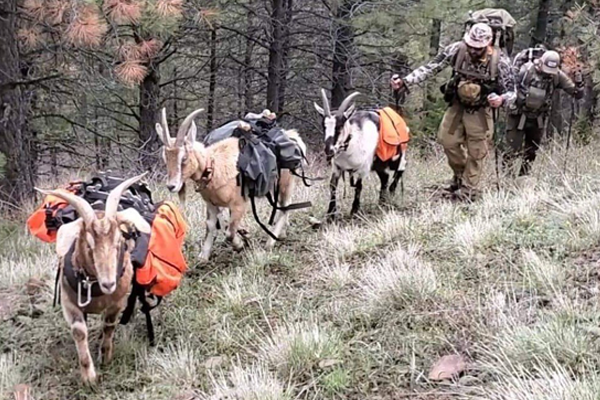 Some public lands require permits for the use of pack goats due to concerns of spreading disease to wild animals such as mountain goats.